Football’s Coming Home, but who will win the battle of the celebs? 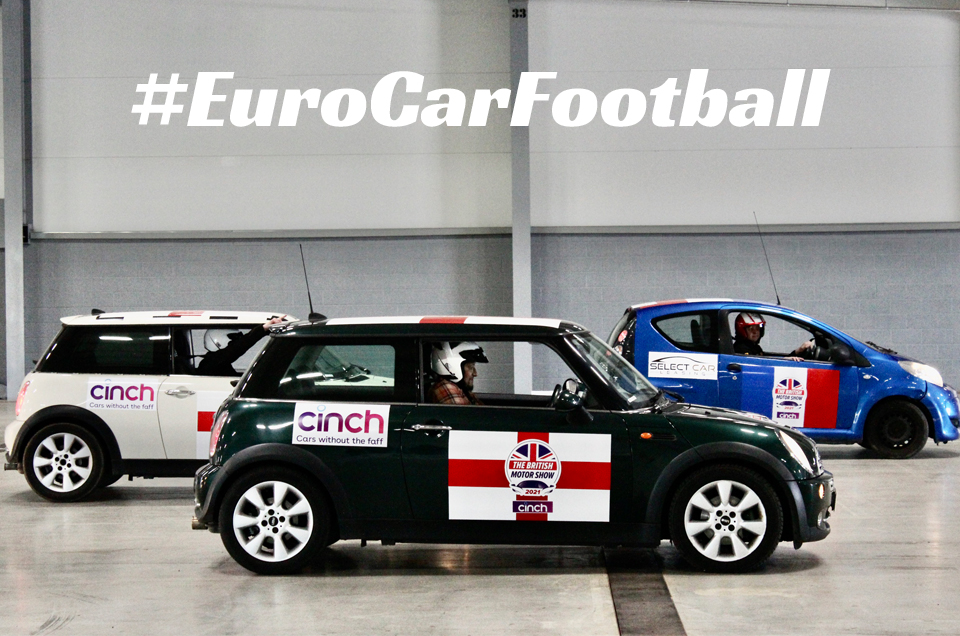 A year later than planned thanks to the Covid pandemic, the European Football Championships are expected to be the most-watched sporting event of 2021.

But while Europe is gearing up to see who can come out on top in the soccer stakes, The British Motor Show is all set to host its own Euro finals with the launch of #EuroCarFootball, a fabulous spectacle that will form part of the live entertainment roster at The British Motor Show, with teams representing England, Italy, France and Germany going head to head in pursuit of an oversized ball inside the show’s live arena.

And to countdown to the event itself, over the next few weeks we will be running a series of celebrity head-to-head football battles in a series of videos available to watch via YouTube and social media.

With a giant inflatable ball and goals, each team will comprise of three vehicles which represent the country: England with the MINI, Germany with the VW Polo, Italy with the Fiat 500 and France with the Citroen C1. There’ll be plenty of high speed action, but the ref (aboard his Renault Twizy) will be looking closely for foul play – and there’s bound to be at least some contact!

The British Motor Show CEO, Andy Entwistle (a Wigan Athletic fan, seeing as you asked), said: “I think we all need a bit of entertainment after the past year or so and Paul Swift’s Car Football championships will definitely deliver that. The games are even more exciting to watch than the real thing and are bound to prove yet another layer of entertainment in what’s already a fun-packed, family-focused event.”

In order to launch #EuroCarFootball, The British Motor Show pitted former professional footballer Jimmy Bullard head-to-head with BTCC driver Aiden Moffat in the first of the car football battles – you can see the outcome here.

The next round will see Amy Dowden vs Sam Pinkham, then Mike Brewer vs Marc “Elvis” Priestly, Fuzz Townshend vs Paul Swift and the all-important all-BTCC finale, Ash Sutton vs Aiden Moffatt.

But who will come out on top? Will the fabulous footwork of the dancers outweigh the competitive driving of the BTCC stars, or will Fuzz save more than just someone’s cherished classic with a goal-line clearance that wins the ultimate trophy?

Keep up to date here

Football’s Coming Home, but who will win the battle of the celebs?
.