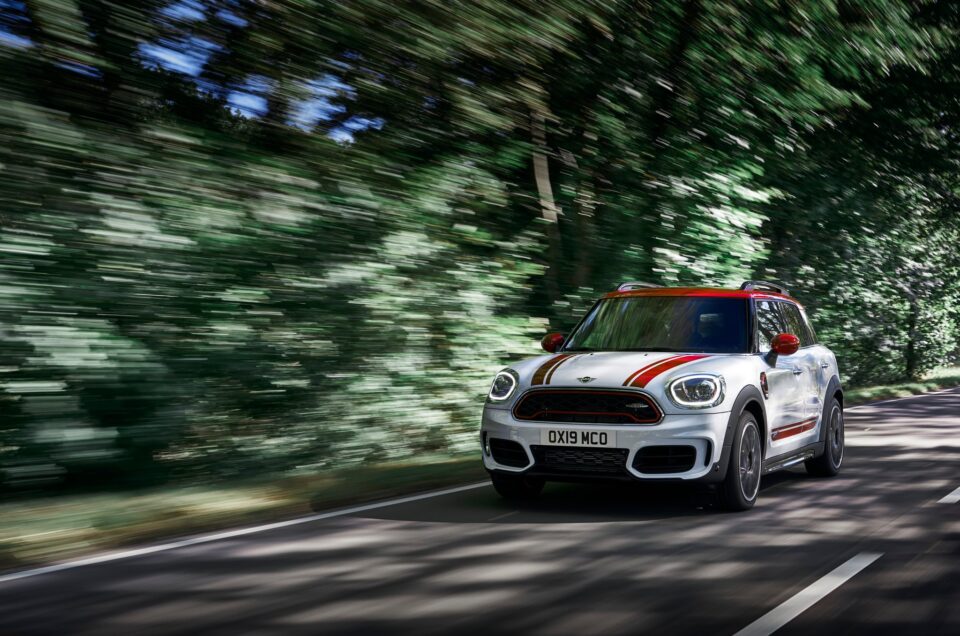 The Countryman JCW packs a powerful 2.0-litre turbocharged petrol engine, but does it succeed in other areas as well as performance?

The hot crossover market is currently quite a limited one. Yes, the base models themselves are hot property, but drivers seem to be happy with keeping them as practical run-arounds rather than exciting daily drivers.

Mini has been trying to buck this trend for a few years with its Countryman John Cooper Works – taking all the know-how of its JCW programme and adding it to the firm’s largest model. By combining the attributes of practicality and sportiness, can this be a remedy for petrolheads who need a bit more space in their lives? We take a look.

The standard equipment has also been upgraded to include driving modes, the navigation pack alongside a 6.5-inch touchscreen and parking assistance, as well as other quality extras.

Here the Countryman JCW utilises a potent 2.0-litre turbocharged four-cylinder petrol engine that develops 301bhp and 450Nm of torque – which is a substantial leap over the previous model. With the help of an eight-speed automatic transmission and the All4 all-wheel drive system, this Countryman can get from 0-60mph in just 4.9 seconds before topping out at 155mph.

That setup sounds punchy, and when you put your foot down, the JCW delivers on that promise. The throttle response, especially in the sport mode, is excellent and it never feels like the turbochargers need time to spool up. Although efficiency isn’t the largest concern for those wanting a John Cooper Works model, the Countryman returns decent figures of between 38.7 – 40.9mpg and CO2 emissions of 188g/km.

Despite sitting higher up than other Mini models, the Countryman JCW manages to offer an exciting driving experience without being overly unwieldy. Mini has been great at setting up sporty versions of their models for some time, and this is no different, as the steering is direct enough to allow for good turn in, and the weighting is again excellent – although sportier driving modes will add a little too much heft.

With the JCW setup, body roll is very limited too, and the Countryman feels composed thanks to its purpose-built sports chassis that helps keeps everything in check. Add to that the sports braking system, and the Countryman JCW feels like a potent crossover that any keen driver would like to get behind the wheel of.

Let’s be fair, the Countryman is basically a photocopied Mini Hatch that’s now about 20 per cent larger. But the retro touches that are used across the Mini line-up work well here, including the large headlights and familiar grille.

The JCW treatment adds extra sportiness to the sometimes dull standard Countryman, with racing stripes off-setting the base colour – usually red detailing against a lovely British Racing Green. The optional 19-inch alloy wheels are also a nice addition, but can compromise comfort over cracks and bumps in the road.

With the car larger than all other Minis, you do get more space inside. Head and legroom for adults are good throughout, meaning if you’re after this as a family option it will do a great job indeed. You’re greeted with the circular hub that is at the centre of dashboard. It houses the touchscreen infotainment setup which can also be controlled by the dial next to the automatic gear lever.

There are a few sporty touches here and there, including the JCW steel pedals and dual-material Recaro sport seats that keep you in check when going round a corner a bit quicker than normal.

For storage, the JCW copes well and people will have access to 450 litres of boot space, with little spots dotted around the cabin for smaller items. If all the rear space is needed, the folding rear seats can drop to reveal a 1,390-litre load space.

Inside you also get the aforementioned Recaro seats, a sports leather steering wheel, steel pedals, cruise control with brake function and two of Mini’s comfort-focused option packs. That brings the cost of the JCW to £35,550.

The version we tested also came with a £550 British Racing Green paint job, Mini’s Navigation Plus pack that included Apple CarPlay and wireless charging, and a few other pieces to take the overall price on test to £39,525.

The Countryman JCW may not be the most obvious family model around but it manages to make a typical crossover much more exciting than you might expect. The exterior design treatment makes it stand out straight away, while the potent performance when you put your foot down is very hard to ignore.

The interior design however looks like you could be in any other Mini, meaning it isn’t the most special inside, while the looks may not be for everyone.

But if you’re in the market for a family bahnstormer, then the Countryman John Cooper Works could very well be for you.