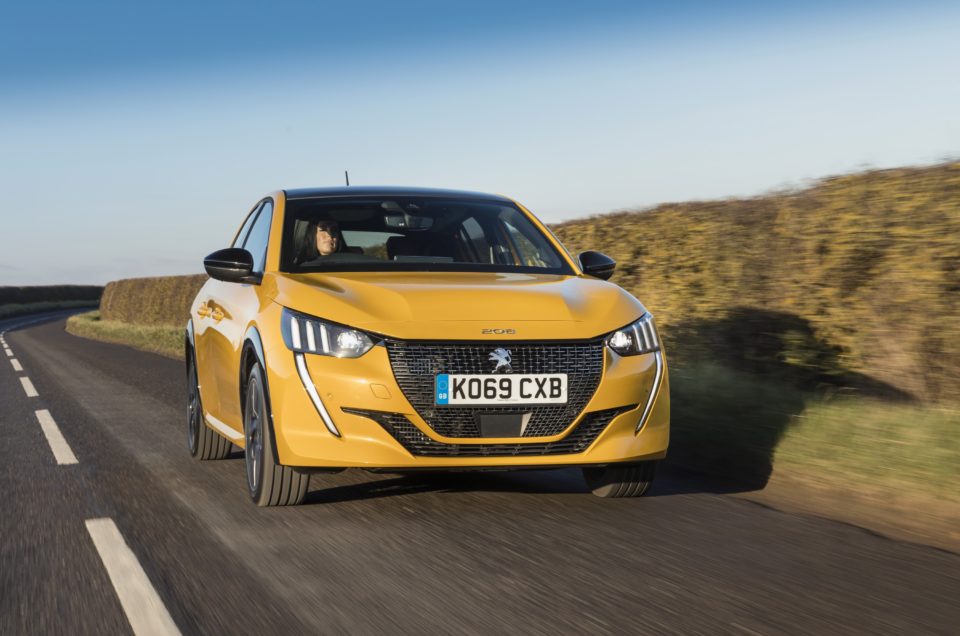 The Peugeot 208 returns with more tech, a new look and three all-new powertrains. But is it any good? Peter Jones finds out.

Peugeot has been making models with stand-out design for the last few years, and that has been continued with the new-look 208. The supermini is sharper and more modern-looking than before – and we’re not just talking about the outside.

But this is also the first 208 to come with an electric powertrain alternative. As part of the French firm’s ‘Power of Choice’, customers can choose from petrol, diesel or electric power – all on the same platform and without compromise for practicality. But does it work? We find out…

The 2020 208 sits on PSA Group’s CMP platform – allowing for combustion and battery-powered powertrains. But on top of that comes a body with a reworked design and a cabin filled with the latest equipment on offer, including the new version of the i-Cockpit setup.

Peugeot has also made this version of the 208 slightly bigger than before, allowing for a more spacious interior. The main new offering with the 208 though is the electric powertrain, which offers up to 211 miles of charge. Peugeot also expects customers to plum for a wallbox with the model as well, so they’ve made the three-pin plug cable an optional extra.

Here we tested what Peugeot expects to be the most popular engine and gearbox combination – the 1.2-litre three-cylinder turbocharged petrol paired to a six-speed manual transmission. Developing 99bhp and 205Nm of torque, it has enough poke to get from 0-60mph in under 10 seconds and can reach a top speed of 117mph.

Admittedly it isn’t the fastest petrol option you can go for – with the 129bhp version offering more kick – but this unit suits the 208 well. It’s characterful and works well alongside the slick manual, which has short shifts for quicker changes.

Going for this powertrain also means good economy – with Peugeot claiming this can get up to 53mpg with the manual ‘box and emit less than 100g/km CO2. Of course if you’re after better emissions and frugalness, then go for the BlueHDi diesel, but that’s expected to only attract fleet customers.

As you’d expect from a car of this size, urban roads are where it feels most at home. The route we were on didn’t showcase that enough, but when we were in town it felt easy to manoeuvre thanks to its light steering and the fact it doesn’t feel too big either.

On twistier national speed limit roads, the 208 doesn’t get flustered. It feels well-balanced and controls its weight well – although it can feel a touch firm over the UK’s more rutted country roads. There also wasn’t a lot of feel from the steering and we would have liked a bit more involvement so we could get the most out of it.

When cruising, the 208 is rather pleasant. The engine is very refined and hushed at higher speeds, while wind and road noise doesn’t penetrate into the cabin too much either.

In our eyes, there are few small cars that look better. We said the design was a key selling point for the model when we tested it last year, and that feeling hasn’t changed in the last few months. It looks fantastic, especially in a brighter colour, and the new face is sharp, sporty and instantly recognisable – thanks to the ‘three-claw’ headlights.

There is one gripe we have with the 208 though, and that’s how some drivers might struggle to get the right driving position. Taller people will find getting the steering wheel in the right place without blocking the instrument binnacle, while your knees will hit the lower part of the small steering wheel. The pedal box can also feel quite small for those with bigger feet. Adults in the rear may also not be as comfortable, with the legroom limited.

In terms of looks, the 208 has one of the best cabins in the segment. The 3D i-Cockpit is really cool to look at, with the main readouts looking holographic, and the driver is able to configure what is shown on there too. The switch gear is similar to before, with the piano key panel home to most of the infotainment’s menu controls.

In terms of storage, the 311-litre boot space is well-sized for a supermini, while folding the split rear seats down increases that to 1,106 litres.

We tried what is expected to be the most sought-after trim. The mid-spec Allure version comes with a handsome amount of equipment and doesn’t cost the Earth either. Priced from £18,850, this 208 comes with a seven-inch touchscreen with the 3D i-Cockpit setup, automatic air conditioning, rear parking sensors, automatic headlights, a leather steering wheel and a series of driver assists.

Our test car also came with a couple of extras, which bumped the price up by a further £1,345. A 10-inch touchscreen system was installed instead, while the Vertigo Blue paint job was a £695 extra – taking the total price of our test car up to just over £20,000.

The supermini market will always be a competitive one, and Peugeot may be near the apex now with its latest effort. The 208 looks great inside and out, has a fleet of tech features any driver would want and it drives well – although the Ford Fiesta is more engaging in our eyes.
Our major grumble with the 208 though is the space on offer. Yes, we don’t expect it to be the size of a lounge inside – but we’d just want a bit more room for both taller drivers and passengers.

But does that knock the 208 enough? Not for us. It is finished to a high level and is a great alternative to the all-conquering Fiesta. The electric option helps matters as well.