Supercar with a difference debuts at The British Motor Show 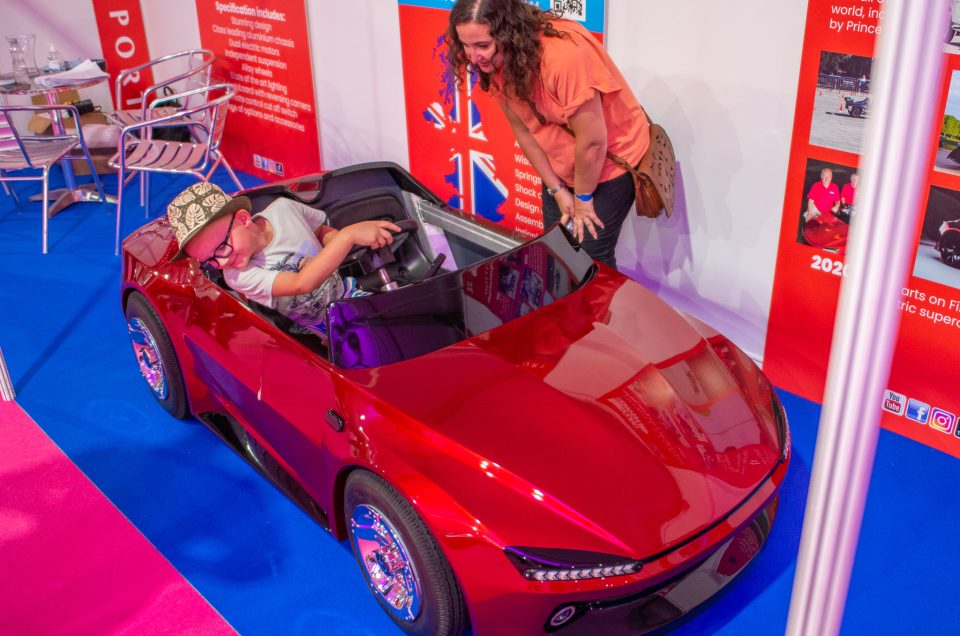 An all-electric supercar designed for children aged 4-10 has made its debut at The British Motor Show 2022. Young Driver Motor Cars’ all-British and all-electric Firefly Sport will fuel children’s interest in cars and driving from an early age, while educating them about road safety and how future motor vehicles can be an environmental force for good.

A sister company to Young Driver – the world’s largest under-17s driving school – Young Driver Motor Cars will start production of the Firefly Sport model this month. The 2.1 metre-long car, which can accommodate children aged 4- to 10-years-old (and even adult drivers) will use only UK-sourced components for series-build cars – including their batteries and electric motors – making the Firefly Sport the country’s first all-British EV.

Pooling expertise from around the UK’s motor industry, YDMC’s Firefly Sport is built on a state-of-the-art aluminium chassis with all-round independent suspension and rack and pinion steering, offering young drivers an authentic taste of how a road car looks, handles and performs.

And it should do, too. Steve Rawson, formerly of Aston Martin, has been responsible for Firefly Sport’s production engineering, while ex-JLR and MG engineer, Dr. Ian Pogson, developed its highly adaptable powertrain. And Firefly Sport’s rakish and exotic-looking body was the work of tier-one automotive agency, Puremedium design, based on a detailed brief by YDMC, and delivered in a remarkable six-month time-frame.

Firefly Sport uses two, class-leading, cleverly packaged and recyclable 12-volt batteries from a Bromsgrove-based supplier, powering twin 24-volt electric motors which are manufactured in Bournemouth. Maximum speeds will vary depending on the gearbox specified, but will range from 25mph, down to 7mph for the youngest drivers. However, Firefly Sport also has a remote cut-off facility with a 200-metre range, as well as an automatic cut-off if it senses obstacles in its path, making it ultra-safe for first-time drivers.

Inside the open-topped two seater (a roof is optional for all-weather use) drivers are presented with a digital instrument pack that can be personalised on start-up with the user’s name and photograph. There are three instruments – a speedometer, clock and range indicator – as well as a reversing camera and pilot lights for indicators, headlights/tail lights etc.

“Firefly Sport is a fully-fledged, scaled-down motor car,” said Ian Mulingani, YDMC’s managing director. “From its launch this month it will allow 4- to 10-year-olds the chance to get behind the wheel and have an authentic motoring experience, thanks to this model’s sophisticated design and componentry, which fundamentally mirror the way a road car behaves, but at fully manageable speeds. Being electric and looking like a junior supercar, it also aligns with the type of vehicle that children see themselves driving when they pass their test. And it’s precisely this kind of engagement we need at our Young Driver training centres to start them on a journey towards improved road safety – and ultimately, preventing unnecessary road deaths.

“But we’re also proud that Firefly Sport will be this country’s first all-British electric vehicle, when you take into account not only where it’s manufactured, and the team responsible for its creation, but also that its components are sourced from here, too. The body comes from Huddersfield, the chassis is from Coventry, and the motors and batteries are from suppliers in Bournemouth and Bromsgrove. If you think about how the UK’s motor industry is moving towards greater autonomy with parts-sourcing, we’re definitely ahead of the curve!”

And while Firefly Sport will be available for 4- to 10-year-old drivers at 45 of Young Driver’s training centres across the UK (£20 for a 15-minute test drive), it can also be purchased outright by families who have sufficient space for children to drive the car on private land. Pricing will be announced at the British Motor Show on August 18th, and the car can be specified in a wide range of colours, with plenty of options to choose from. The car is ultra-green, and can be re-charged using solar power, and its battery’s cells are bolted in, making them easy to remove and recycle.

While Firefly Sport production will initially be focused on the young drivers’ model, YDMC has plans to develop the range to include variants suitable for adult use, in a range of different applications. More news about these exciting projects will follow in the near future.

Young drivers wishing to book an early test drive in Firefly Sport should go to: www.youngdriver.com

Supercar with a difference debuts at The British Motor Show
.