Who are The Sporting Bears? 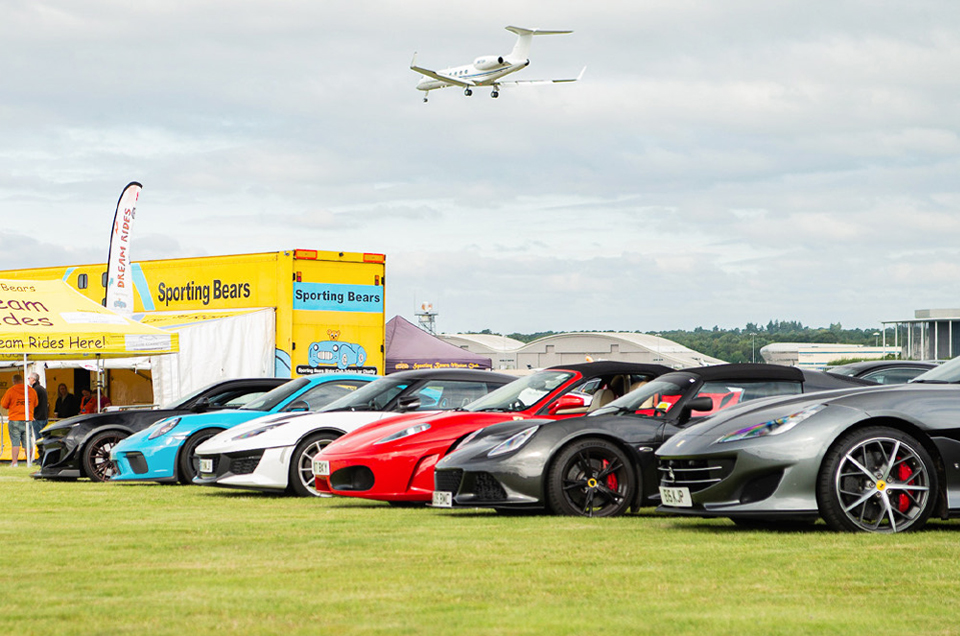 Last August, more than 47,000 people fell over themselves to get to The British Motor Show at which The Sporting Bears Motor Club established a strong presence, proving to be one of the most popular attractions at the event. Accompanying the “Bears”, as they are affectionately known, was an incredible fleet of vehicles. From an Ariel Nomad to a 910-horsepower Dodge Challenger Hellcat, there was something for everyone to enjoy at the Sporting Bears stand last year.

Over a 4-day period, the Bears managed to raise a whopping £41,029.80; 100% of which went to children’s charities – the money did not even contribute to the fuel costs of the thirsty cars.

Following this immense success, they will be returning to The British Motor Show this year in August – and it’s about time we share their story of the Sporting Bears Motor Club.

At present, Sporting Bears are raising over £200,000 per annum and have over 1500 vehicles in their fleet; however, from a tiny acorn grew this mighty oak.

It all started in 1989; with one Triumph TR3 owner and a wish. His name was Chris Glaseby, and his wish was to change motoring events for the better.

Chris was perplexed with many motoring events at the time as he felt they were rather boring. Organisations would charge hefty sums of money, simply for members of the public to look at cars – there was no interacting with these cars. Chris also disliked what he felt was the main purpose of these events, which was to deepen the pockets of large companies. He felt the only solution to these issues was to form a motor club with the sole purpose of raising money for charity.

Putting this wish into action required some work and careful thought. First was the task of coming up with a name: Sporting Bears. The first part of the name, which remains the same to this day,  signifies how the organisation is for all types of cars, with the latter hinting at how all proceeds go to children’s charities. The logo was a Triumph TR3 with a teddy bear behind the wheel. 30 years on, the Bears still use this as their logo as it is integral to everything they do.

The first ever Bears event took place on 17th December 1989. The Bears drove from Duxford IWM to Addenbrooke’s Hospital and the Cambridge Children’s Hospice, whilst making a few stops on the way to collect more and more toys to deliver to the children. This trip almost became a bit of a tradition for the Bears as it was repeated for the next two years.

When the Bears started to raise money, it was through touring events, raffle tickets and bucket rattling.

In May of 1990 for instance, some of the Bears attended the International Classic and Sportscar Show at the NEC – a total of £800.00 was raised for MIND. The Bears then had a tour in September of 1990 which raised £2,750 for Children in Need; the cheque for which was presented live on stage. Later that same year, some of the Bears took part in the Beaujolais Run and attended the November 1990 NEC show.

But, it wasn’t just famous cars which they used to promote what they did. A resident artist, Andy Danks, used to paint pictures of famous racing drivers in their cars – this included people such as Nigel Mansell, Sir Stirling Moss, Paddy Hopkirk and Pat Moss. All the artwork was signed by the drivers and was soon auctioned off.

The most famous way in which the Bears raise money is through their signature Dream Rides. Dream Rides are offered at some of the largest car events in the country such as The NEC Classic Car & Restoration Show, The Supercar Event and The British Motor Show. In exchange for a small donation, you are able to go out in the car of your dreams for 20 minutes – this idea exists courtesy of Graham Drew.

In the early ‘90s, Drew was the general manager of The Patrick Collection in Birmingham and was constantly looking for ways to increase the collection’s reputation along with what activities its cars participated in. Graham soon realised what automotive enthusiasts desired most, which was to experience their dream cars.

After some coordination with Haymarket Exhibitions, Drew came up with the idea of taking 10 cars from The Patrick Collection to the Top Gear Classic Car Show at the NEC. All of the cars could be experienced by members of the public in exchange for a small donation to the Patrick Trust.

Unfortunately, just 10 weeks before the show, the owner of the Patrick Collection decided to withdraw all the cars from the activity. But, the Motor Club and its members jumped in to ensure that the activity could go ahead. And so, the decision to run the activity with other cars and brand it all as a Sporting Bears event was made; resulting in the very first Dream Rides event.

In total; 14 cars were involved, including a 7-litre Cobra; and a grant total of £4,800 was raised for charity – this was more than enough to encourage the Bears to continue offering Dream Rides.

In its 30-year-long history, Dream Rides have not only raised significant amounts of money for charity and put a lot of smiles on faces, but they’ve also caught the attention of some rather famous faces within the automotive industry.

Former Rolls-Royce chairman, Sir Ralph Robins, made a unique appearance at one event. He brought his company car and gave six Dream Rides, without any of the passengers knowing who he was.

To this day, the Bears still have a strong connection to Rolls-Royce as the British automaker can often be seen providing its latest vehicles for events. This includes a London event where ten families are chauffeured from a hotel to the Tower of London under police escort.

Legendary F1 driver, Sir Stirling Moss, also took part in a Sporting Bears event. One lucky raffle winner won a Dream Ride with the former F1 driver. Moss decided to borrow a Jaguar E-Type, which belonged to one of the members.

One famous face which the Bears currently work with is legendary presenter Mike Brewer who is best known for his role in Wheeler Dealers. Mike is a club patron for Sporting Bears, and also hosts the live stage at The British Motor Show.

Last year was a spectacular year for the Bears as they began to recover from the pandemic and were able to run their events again. They raised in excess of £235,000 in the year, £198,000 of which was raised in just ten weeks.

£41,029.80 was raised during the 4 days at The British Motor Show. 100% of this was then split equally between three organisations: the Chestnut Tree House, SeeSaw, and the Marcus Rutherford Foundation.

The Bears look forward to a bigger and better British Motor Show this year. The event will feature everything it did last year – including The Live Arena which features stunt shows, supercars and car reviews; The Supercar Paddock; The Sporting Bears stand; and much more. Additionally, there will be several new attractions such as a car-themed escape room and a second hall.

As we get closer to the event, keep an eye out for articles containing information on what the Bears plan to do this year.

Who are The Sporting Bears?
.