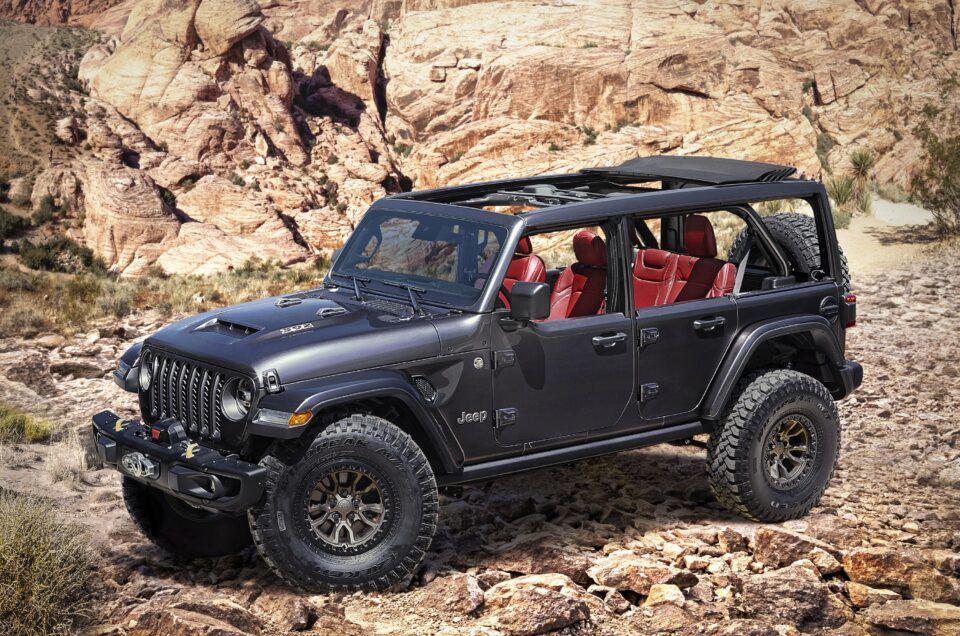 Powerful off-roader packs close to 450bhp and 610Nm of torque.

Jeep has revealed a new concept which takes its regular Wrangler off-roader and considerably boosts its performance.

Called the Wrangler Rubicon 392 concept, the four-wheel-drive does away with the conventional petrol and diesel engines usually found in Jeep’s iconic off-roader and instead uses a powerful 6.4-litre V8 engine.

With close to 450bhp and 610Nm of torque, the concept is capable of reaching 60mph from a dead stop in ‘less than five seconds’ according to Jeep, with power sent to the wheels through an eight-speed automatic transmission.

Of course, the Wrangler’s ability to conquer rough terrain has been retained and improved with the concept. It features upgraded suspension with monotube Fox shocks for better damping and heat dissipation. A full-time two-speed transfer case, electronic front and rear-axle locking differentials and huge 37-inch mud-plugging tyres help to make the Jeep extremely accomplished off-road.

Exterior upgrades include a special granite crystal paint, bronze accents for the tow hooks and badging – among other areas – and a heavy-duty raised performance bonnet.

A dual-mode exhaust has been fitted too, giving the Wrangler a performance-orientated exhaust note.

Though just a concept for now, the extensive range of modifications and production-ready look of the Rubicon 392 Concept appear to show that this latest Jeep could be heading on to the production line shortly.