First Drive: The Caterham Super Seven 1600 harks back to a golden age of motoring 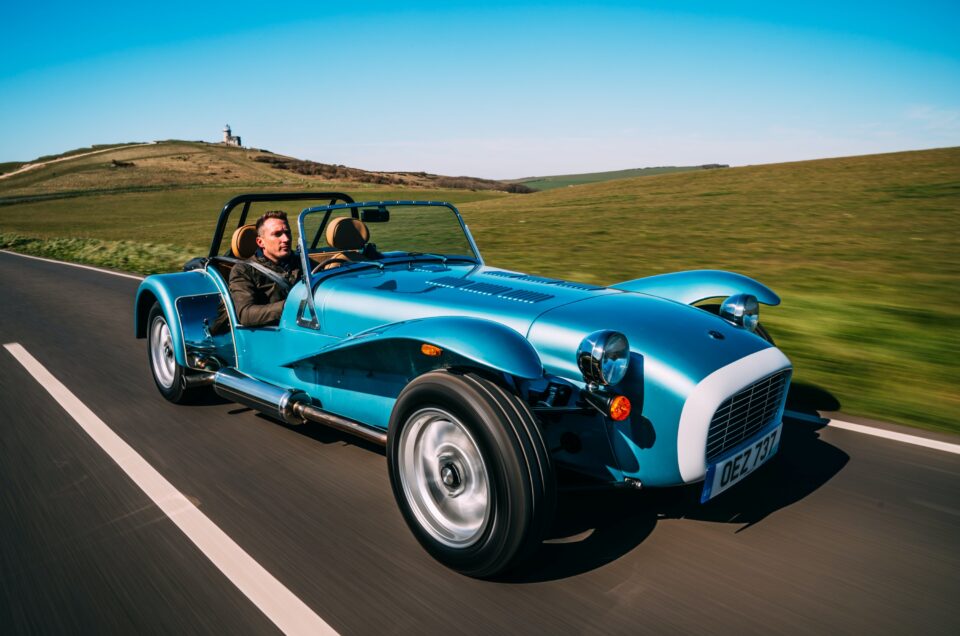 The Super Seven 1600 is a new take on a retro design, but what’s it like to experience? We get behind the wheel to find out.

This is the Caterham Super Seven 1600 – a car with even more retro touches incorporated into its design than even the standard Seven can offer. According to Caterham, it draws inspiration from the classic Sevens of the 1970s which is why you’ll find flared arches and a high-quality interior befitting an old-school car in this decidedly brand-new two-seater.

But does it incorporate that driver-machine connection that has caused the Seven to prove so popular among driving enthusiasts? We’ve been out in the Super Seven 1600 to find out.

Though the look may be different, the recipe is the same here; there’s a reasonably powerful engine up front, drive to the rear wheels and space for two in the middle.

It’s a setup that Caterham has refined over the years and while new chassis sizes allow taller drivers to get comfortable – our ‘Large Chassis’ car was one such vehicle – the basic layout has been kept the same.

But Caterham has some tricks up its sleeve for the Super Seven 1600. It has taken learnings from 1970s motorsport to give the engine a little more kick, for instance, and there are other mechanical goings-on happening here too. But more on that later.

The Super Seven 1600 uses a 1.6-litre Ford Sigma for propulsion, and thanks to a generous 135bhp – equating to 250bhp-per-tonne in the featherweight, 565kg Caterham – that means a 0-60mph time of five seconds and a top speed of 122mph. Peak power comes high up in the rev range at 6,800rpm, while the peak amount of torque – 165Nm – arrives at 4,100rpm. Caterham has also fitted the engine with Twin 40s throttle-body upgrades and K&N filters for a more motorsport-inspired response.

Power is sent through a delightfully mechanical five-speed manual gearbox, while Caterham has fitted ‘our’ Caterham with its road suspension pack. Both a sport and track suspension setup are available for those who want a slightly more engrossing ride, but this is being pitched as a car for the road first and foremost – hence the suspension setup angled towards road use.

As with any Caterham, the sense of connection between driver and car is immediately present in the Super Seven 1600. The steering has a great deal of life to it, buzzing and chattering as the front wheels skip over the road ahead. In the dry, there are handfuls of grip to be found and while that’s considerably diminished in the wet, driven sensibly the Super Seven 1600 can be managed when the weather turns soggy.

Rev the engine out and you’re rewarded with a sumptuously savage bark from the engine, and the acceleration comes in equally raucous bouts. Though this is by no means a ‘quick’ Caterham, it’s more than pacey enough to see off most hot hatches. And in terms of sheer-willed entertainment, there aren’t many cars that feel quite so alive from behind the gloriously retro Moto Lita wheel.

When it comes to head-turning design, the Caterham Seven still takes the biscuit. Few people miss this car when it comes zinging past, with the flared arches and bright ‘Caribbean Blue’ paint scheme of this car in particular making for a roadster few will miss. It certainly has a softer appeal to it compared with the carbon-fibre-laden, stripped-out models in the rest of the Seven range, making it better for trips along country lanes on sunny Sundays rather than razor-edged laps around Snetterton race track.

The retro-designed alloy wheels finish the look, while the mohair hood, boot cover and side screens only help it to feel even more like a classic two-seater.

Make no mistake, even though there’s a wider chassis option available, the Super Seven 1600 is not a big car. Once you’re inside the cabin – not an easy feat in itself, particularly with the roof in place – there’s not a lot of room for, well, anything. Sure, there’s a small area behind the seats where you’ll be able to drop a few soft bags or some shopping, but in terms of practicality, the Seven isn’t up there.

But of course, that’s not the point of this car. The driving position is excellent, the heater blowers are powerful enough to take the edge off an evening chill, and there’s even a light to remind you to put your seatbelt on, which is practically cutting-edge technology for a Caterham. The leather for the seats is good quality though, while all of the major touch points are finished in equally high-end materials.

Prices for the Super Seven 1600 start from £33,495, and for that you get 14-inch silver alloy wheels, black leather seats, classic Smiths gauges and a choice between six special paint finishes. If you’re feeling adventurous, Caterham will deliver the Super Seven 1600 at home in kit form for you to assemble yourself, otherwise, you can spend £2,395 for the Crawley-based outfit to build it for you – on top of that initial £33,495.

Our car, with its optional SV chassis, lowered floors and ‘Biscuit Beige’ leather seats chimed in at £39,655. It’s a lot of money for a car of this type, we’ll admit, but it’s a solid investment – Caterham values rarely dip, even with more miles on the clock.

The Caterham Seven has never been a car that you purchase with your head. After all, it’s not particularly useable on a daily basis, it’s not practical and it’s not geared towards families whatsoever.

However, what cars like the Super Seven 1600 do is prove that there’s still a place for cars that revel in the joy of driving, something that this Caterham delivers time and time again. And though this is a car for the modern age, it’s still one that delivers the old-school thrills from the golden days of motoring.

First Drive: The Caterham Super Seven 1600 harks back to a golden age of motoring
.