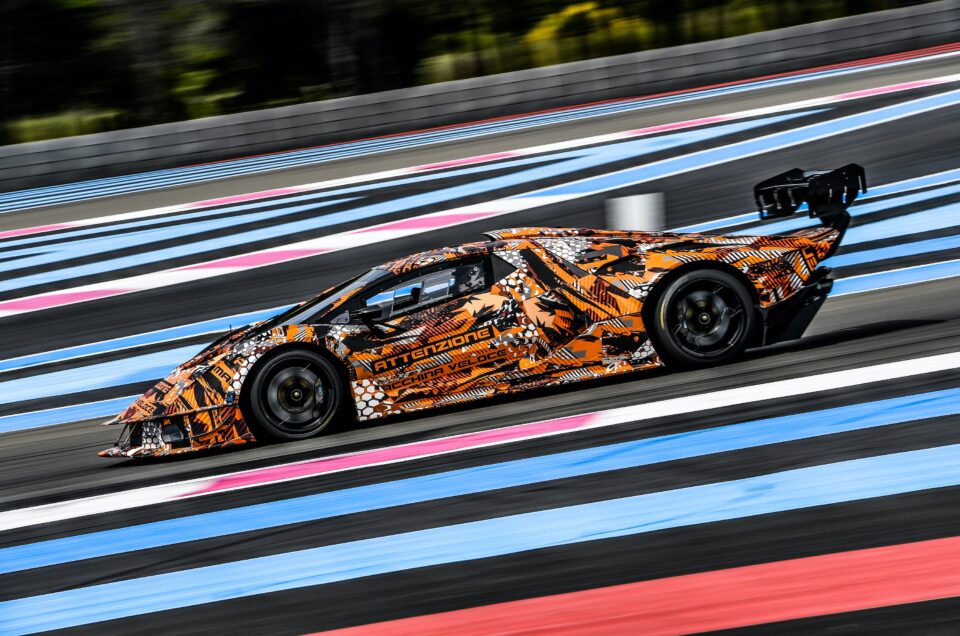 The SCV12 has appeared wearing orange camouflage ahead of its reveal next week.

Lamborghini has released teaser images of its new track-only hypercar.

Dubbed SCV12 – referencing the firm’s motorsport division ‘Squadra Corse’ and the V12 engine – it has more downforce than a GT3 race car and will be sold in limited numbers.

Having completed its development programme, the SCV12 features the most powerful V12 Lamborghini has ever produced, making 818bhp. This engine goes without turbochargers, instead using a ram-air scoop on the roof – which is also fed by two further intakes in the bonnet – to cram as much air into the engine as possible.

Its body was developed by Squadra Corse, which made it more aerodynamically efficient with higher downforce levels than their GT3 racer. This is achieved through a prominent front splitter, lateral flicks and vertical fins on the side sills, and a massive carbon-fibre rear wing.

Speaking of carbon-fibre, the whole chassis is made from the lightweight material, and the six-speed gearbox has been built into it to reduce weight and improve weight distribution. It’s also rear-wheel drive with specially developed slick Pirelli tyres with magnesium rims that measure 19 inches at the front and 20 inches at the rear.

The limited run of cars will be built at the Squadra Corse factory, and buyers will be allowed to drive their cars at specific track days with the support of the motorsport engineers. They will also receive driving tutoring from Emanuele Pirro, five-time Le Mans 24-hour race winner.