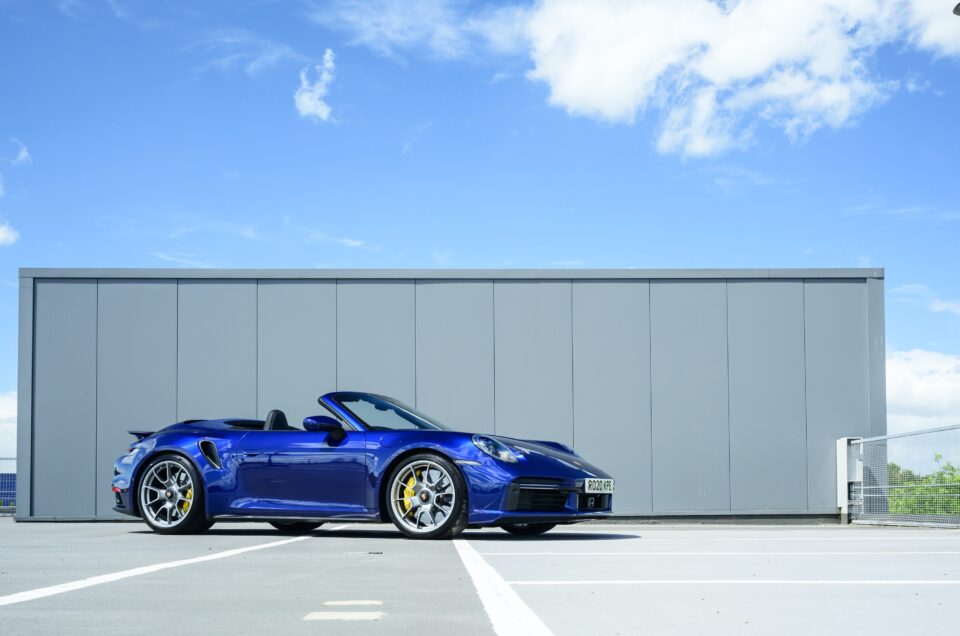 This is the Porsche 911 Turbo S – the biggest, baddest 911 you can buy right now. The Turbo name has long been synonymous with being the ultimate incarnation of this famous sports car outside of the more racey GT models, but with this generation, Porsche has ramped the lunacy up to 11. Its performance figures are frankly astonishing.

The question it has to answer is this: What’s the point of the Turbo S? Now that all Porsche models have turbocharged engines the name merely denotes a model variant rather than a stand out mechanical feature, and at well north of £150k it’s competing with arguably more exotic machinery in the form of the Audi R8 and McLaren 570S.

Also, do you really need 641bhp? The appeal of non-GT 911s is their ability to be fast but also commutable. You could buy a still-fast 911 Carrera 4S and get a Porsche Cayman for the weekends for the price of one 911 Turbo S.

And that’s all before we mention the electric Taycan, which is slightly less expensive but even more violent in its acceleration, but with none of the environmental guilt. There’s a lot to unpack here, so let’s dive in.

Aside from the engine, which we’ll go into detail on below, the most significant change is perhaps the size. Even Porsche says it’s ‘significantly’ larger than before, being 45mm wider above the front axle and 20mm wider at the rear to allow for a wider track to improve handling.

Other changes designed to improve the way the car drives include improved aerodynamics, mixed-size tyres for the first time, the option of Porsche Active Suspension Management that improves handling and lowers the car by 10mm, and a sports exhaust system with adjustable flaps to control the sound.

Performance comes from a rear-mounted 3.8-litre petrol engine, which is based on the existing 911 unit but with an extensive performance-focused overhaul. It gets a new charge air cooling system, new larger turbochargers and new injectors, as well as an updated intake system that improves airflow to the engine while creating less resistance.

The result is astonishing. Pin the throttle and there’s a momentary lag in response before the engine comes alive and catapults you forward. The engine note isn’t the sweetest but it’s all-encompassing and really adds to the attack on the senses this car provides.

With 641bhp and 800Nm of torque going to all four wheels, Porsche quotes a 0-124mph time of just 8.9 seconds – and that’s entirely believable. The surge in speed is incredible and it accelerates harder as the speed increases. Honestly? It’s too much for the road, but it’s an engineering marvel and the kind of performance you just have to keep tapping into again and again.

The unique selling point of the Porsche 911 has always been its ability to soak up daily duties with ease while also being great fun to point down a twisty road, and that’s still true here despite its ludicrous performance.

Drop into the familiar surroundings and the engine feels perfectly happy to pootle around town at 30mph, with no juddering or a sense it would prefer to be at higher revs. There are some concessions to performance though, with the ride becoming quite jiggly on rougher roads, while the fact it’s so wide can make it a little intimidating on narrow streets or country lanes.

When you’re making the most of the performance, though, it comes alive. If you want a car that’s light and agile down a British B road then the Turbo S is not the right car, especially in Cabriolet form as we’re testing here. It feels heavy and the front end isn’t as eager to turn in as you’d hope. But take it easy in the corners and unleash that six-cylinder engine when the road opens up and you’ll get a grin from ear to ear.

There’s been a long-standing joke that the Porsche 911 looks the same every time it gets updated, but with its position as one of the most popular sports car ever made, if it ain’t broke, don’t fix it. Taken at face value the idea that this car is understated is hilarious, with its massive rear arches and prominent brake calipers making it clear there’s performance on tap. But compared with exotic rivals in this price and performance point it definitely flies under the radar, giving it a different appeal to the likes of the Audi R8 and McLaren 570S.

Drink in the details though, and the relative subtlety has to be admired. Up front there are wider intakes that contribute to a more purposeful look, while prominent intakes in the rear wheel arches that are visible in the wing mirrors are a nicely aggressive touch to set the Turbo S out from the rest of the range. And while the front end might be subtle there’s no denying the rear is more aggressive, with a prominent spoiler, chunky vents and a quad-exit exhaust.

It’s exquisitely Porsche inside, feeling enclosed without being claustrophobic. It’s ergonomically brilliant, with everything falling to hand as it should and there’s just the right combination of physical buttons and touchscreen controls too.

The materials are excellent as well, and the infotainment screen is clear and easy to use. Once you get used to seeing it, even the odd stubby gear lever becomes normal. Naturally, being a 2+2 rather than a strict four-seater means those in the back will struggle for leg room, but this being a serious sports car it’s difficult to mark it down for that.

There’s no denying that the Porsche 911 Turbo S is a highly desirable sports car. It treads a fine line between being understated compared to its rivals while also making it clear it’s a serious performance car… while also combining everyday practicalities with the kind of pace you couldn’t buy for any money a few decades ago.

It’s ridiculously capable in corners, but it’s so big, heavy and insanely fast that for most mere mortals extracting that performance will require an overdose of brave pills. For those looking for the ultimate ‘driver’s car’, a GT3 RS would be a better option – though we’re yet to see the latest 992-generation version of this. But for those who will happily sacrifice a little agility and focus of purpose in favour of warp-speed performance then look no further.