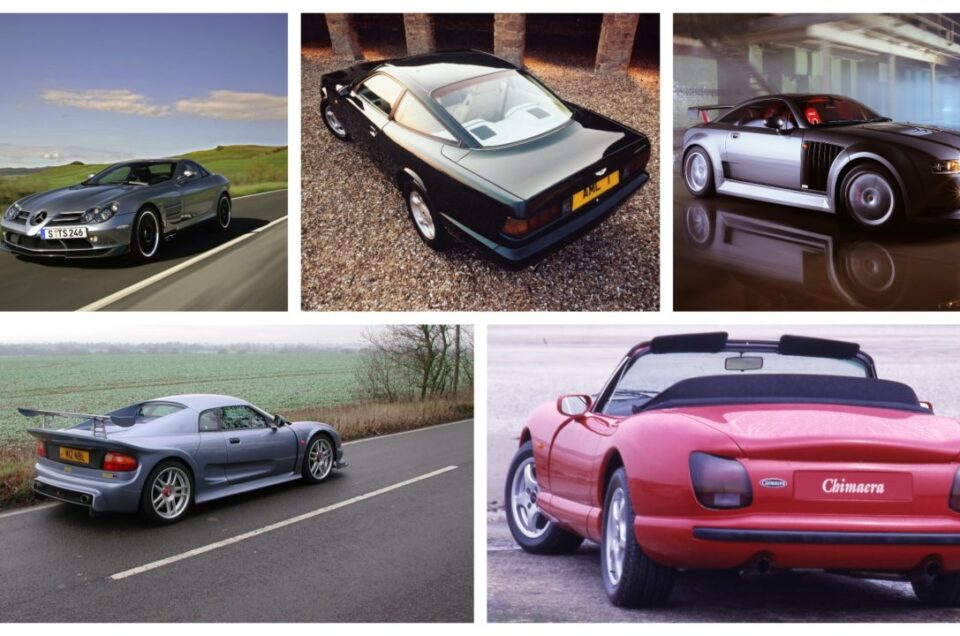 Supercar development costs are so vast that manufacturers often have to look further afield for parts that would otherwise be way too expensive to engineer on their own. Here are the reverse Robin Hoods of the supercar world, which have borrowed from the poor to give to the rich…

Noble’s first supercar, the M12, had the instantly recognisable rear lights from a Mk1 Ford Mondeo. It was a pretty humble car to source parts from, particularly when you consider how incredible this Noble was.

The big Virage was Aston Martin’s flagship from 1989 until 2000, by which time it was almost as archaic as its tail lights – which, incidentally, were lifted straight from the original VW Scirocco.

The Esprit was the first ‘big’ Lotus performance car and was developed on a budget, using Rover SD1 tail lamps and the British Leyland/Wilmott-Breeden Universal Door Handle, as found on the Morris Marina, Allegro, TR7 and four-door Range Rover, among others. The 1988 facelift did away with these, replacing them with handles from a Vauxhall Cavalier and rear lamps from a Toyota Corolla.

The V10 Viper may have been a true American muscle car, but Uncle Sam had nothing to do with its door mirrors. They were lifted straight from the Mitsubishi 3000GT.

While most of the iconic EB110 was completely bespoke, which was reflected in the price tag, one concession was the model’s (admittedly dainty) electric door mirror switch. Anyone with a Mk3 Vauxhall Astra or well-equipped Corsa would know it instantly.

For a while in the early-2000s, the McLaren-Mercedes SLR was the fastest car in the world, so it was quite fitting that it should share its column stalk with the king of the fast lane – the Sprinter van.

At least Dodge chose a performance car to source its door mirrors from. The same can’t be said of the 2009 Aston Martin DBS, which had been developed when Aston was still part of Ford’s Premier Automotive Group. The mirrors came from group partner Volvo and were shared with the V70 estate.

So here’s where the modern supercar began… The BMW M1 was the first true supercar of the 1970s, and if those back lights look familiar that’s hardly a surprise. They were shared with the 6-Series coupe and 7-Series saloon.

Quite why MG Rover thought launching a V8-engined supercar was essential to its survival plans is anyone’s guess, but the Qvale Mangusta-based SV was actually quite a beast. Even if the headlights were lifted from a Fiat Punto. The tail lights were Fiat, too.

TVR looked to volume manufacturers for the rear lamps of its 1990s model range. The Chimaera got its lights from the Ford Fiesta Mk3 – one of the UK’s most popular cars sharing parts with a Blackpool bruiser.