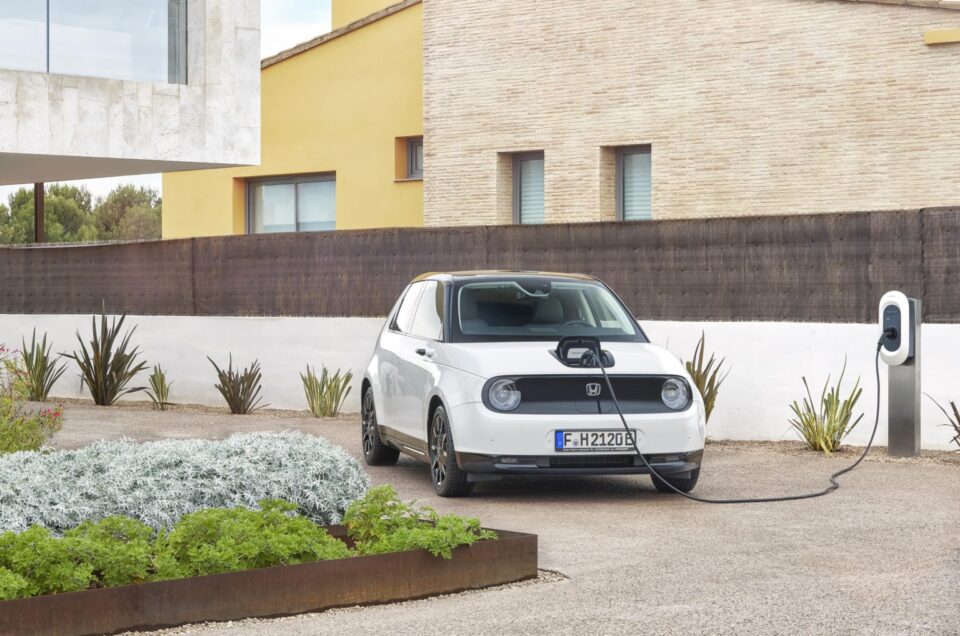 This is the highly anticipated Honda e, an all-electric city car that looks more like a concept than something you’d normally see on the roads. That’s because it sort of is – Honda built a concept car in 2017 called the Urban EV, with cutesy, retro-futuristic styling that hinted at what the firm’s all-electric future technology could look like. People loved it so much, Honda decided to build it as a halo model for its electrified future.

It’s one of those cars you really want to love, because it looks so great inside and out and it’s genuinely interesting in an industry of rampant parts sharing. However, some of the numbers could make it a tough sell – with prices starting at £26k and a range of just 137 miles, similarly priced competitors appear to offer more bang for your buck – or charge for your change, perhaps.

So, we’ve come to a stormy Valencia to find out if there’s enough substance to make the Honda e compete on more than just style.

Pretty much everything is new here, with this being built from the ground up to be an electric vehicle, rather than converting an existing model for EV life. Being the firm’s first full EV, all of the important internals such as the motor and battery are new, as are all of the body panels. It also gets cameras in place of wing mirrors as standard.

Most of the more interesting newness is in the cabin, though. There’s the dashboard-wide screens, the all-new user interface, an artificial intelligence system, and an ambience that feels more like a Scandinavian’s lounge than a Japanese city car.

Power comes from a single electric motor that feeds only the rear wheels, fed by a 35.5kWh battery. Power figures are measured at 152bhp and 315Nm of torque for the motor, resulting in an entirely respectable 0-60mph time of 8.3 seconds. The battery range is up to 137 miles, with recharging to 80 per cent from zero taking 30 minutes at a fast charger.

While performance is punchy and the motor is serenely smooth when you need it to be, that range figure will be a sticking point for many. While Honda argues that most people just don’t drive enough to need more and will charge at home most nights anyway, there’s no hiding from the fact rivals offer considerably more.

For example, the slightly more expensive Peugeot e-208 isn’t quite as powerful, but promises up to 217 miles of range. For peace of mind, some will find that hard to ignore.

As with most electric cars, the Honda e feels supremely responsive to inputs, scooting briskly off the line and darting between traffic with a nimble enthusiasm you just can’t find in a combustion-engined car. Its performance can overwhelm the rear wheels, too, so if you stamp on the accelerator in the wet you’re often greeted by spinning tyres.

It does the cool, calm and collected thing too, though. Electric cars are ultra-relaxing to drive, making the Honda e the perfect antidote to a stressful inner-city commute, amplified by the minimalist interior.

Perhaps what impressed most though was how the car performed in the awful weather conditions on our route. Most city cars would have struggled here, but the Honda e carved a path unflustered, even maintaining composure on the motorway in high winds – its abilities here further highlighting its frustrating lack of range.

Anyone who saw the Urban EV concept and fell in love will be delighted to see that it has made it to production with fewer changes than most probably expected. Its diminutive proportions work fantastically with the genuinely unique styling, looking hilarious mingling with more mundane machinery in traffic.

For some, the fact it stands out so much might be a turn off, but there’s no denying it turns heads, with locals stopping to get a closer look at every opportunity.

If the exterior turns heads the interior really is a show-stopper. The most prominent feature is the wrap-around screens that dominate the dashboard. There’s an 8.8-inch screen ahead of the driver, with two 12.3-inch touchscreens in the centre and ahead of the passenger.

The user interface is excellent, which is all the more impressive given Honda’s existing infotainment systems are generally poor. It’s quick to respond to inputs and is easily configurable, with plenty of useful functions and an excellent sat nav. It even has HDMI inputs, so you can watch high quality video through it.

The material qualities are largely brilliant too. The wood dashboard is a premium touch, and the steering wheel and few buttons present inside feel solidly put together, while the general ambience is that of a high-end Ikea lounge – called kümfikär, perhaps?

Another win for the Honda is cabin space. Its Peugeot rival, for example, feels cramped inside, but the Honda e is light and airy, even for taller drivers – though you’ll be constantly knocking the heated seats on with your knee…

There are two trim levels available, with the base model starting at £26,160 and an Advance model starting at £28,660, both after the government’s plug-in car grant. Monthly finance deals should be about £299 and £349 per month respectively, with about 30 per cent (about £8,000) deposit, though these deals are still being finalised.

All models get the wood trim, sweeping screens and cameras for wing mirrors as standard. The base model also gets 16-inch alloy wheels, heated front seats, a panoramic glass roof and adaptive cruise control. It’s also a little less powerful.

However, Honda is pushing the Advance model at launch, with the vast majority of early orders expected to have this trim. Extra kit includes the addition of a central camera mirror, automatic parking, heated steering wheel, heated front windscreen and a premium audio system.

An important note, though, is that there are optional 17-inch alloys on Advance models, which drop the range from 136 miles to 127.

Standing alone, the Honda e is an utterly fantastic car. It looks brilliant, has a light and airy cabin with fantastic technology, and it’s great to drive too. Buyers who see it and love the way it looks will no doubt also be delighted with how it drives.

However, the range is a sticking point. If you’re like one of Honda’s ideal users, with a short commute and access to charging you’ll be fine, but it’s the ‘what if’ scenarios that often play on EV buyers’ minds. Buying one could therefore be something of a leap of faith, but those that take it – and fit the use case – will not be disappointed.