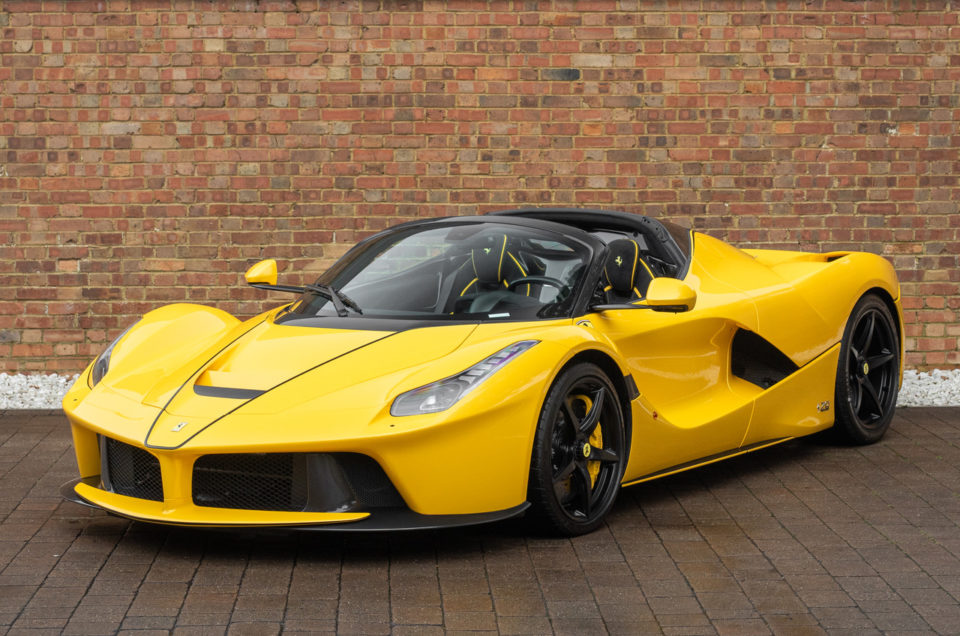 Car finance is a commonly-used option when buying a car today. It allows people to get behind the wheel of a new motor and pay in monthly instalments, spreading out the cost of ownership while giving you that fresh-car feeling.

And though many people use finance as a way of getting into a regular car, plenty see it as an option through which they can own some of the world’s most expensive and high-performance cars. We’ve been given a sneak peek at the most expensive cars ever financed by new finance brokerage company Elev8 Finance – and it’s quite a list.

The LaFerrari Aperta is a drop-top version of the Italian’s firm’s powerhouse hypercar. Utilising a V12 hybrid setup, the Aperta was limited to just 200 cars initially – though an additional nine were sold shortly after. It makes this one of the most sought-after hypercars of its type.

It’s little wonder why it’s accompanied by such as hefty price tag – £3.5m – putting this at the top of most-expensive financed cars.

The Maserati MC12 was the firm’s own entry into the ultra-high-performance segment, and though it was based on the Ferrari Enzo – which we’ll get to shortly – its lack of Prancing Horse seemed to only elevate its prestige.

In fact, just 50 were made – which is why this car’s £2.75 price tag sneaks in just above that of its Ferrari stablemate.

Ferrari has a history of making the most powerful, precise and exceptional supercars ever. The Enzo followed in the footsteps of cars like the F40 and F50 and, of course, featured the name of the firm’s famous owner.

It certainly fits the bill, with a howling V12 engine and excellent dynamics making it one of the greatest cars of its time. That prestige is reflected in its price tag – a considerable £2.25m.

The Bugatti Veyron is a car known by most, largely for its near-otherworldly performance and ferocious top speed. Bugatti wasn’t nearly satisfied with what the standard Veyron produced, however, which is why it turned up the wick with the Grand Sport Vitesse.

With 1,184bhp on tap and a drop-top design, the Grand Sport Vitesse was the ultimate Veyron – and it comes with an ultimate price tag of £2m, too.

We’ve already hinted at the iconic F50, and now it’s here in full. The successor to the F40, the F50 did struggle to emerge from its forebear’s shadow owing to its heavier weight and slightly more blunted performance.

However, that hasn’t stopped it from going down in supercar history as one of the most sought-after. A current price of £1.75m apiece is testament to this.

You might know Pagani for its iconic Zonda – the supercar which seemed to never go away. However, when the Italian supercar manufacturer did need to replace its much-loved Zonda, it did so in typically exuberant fashion with the Huayra.

Using a turbocharged engine for the first time in Pagani history, the Huayra was a flamboyant example of what Pagani could do. It comes with a flamboyant price of £1.75 too.

McLaren’s P1 was the Woking-based company’s halo model. Taking everything the firm had learnt from road cars and F1 too, the P1 arrived as a V8-powered, tyre-shredding and track-devouring monster.

Arguably one of the best-handling cars of all time the P1 gained a lot of fame – and its £1.2m price tag is pretty famous too.

The Porsche 918 Spyder was the final entry into what was to become ‘The Holy Trinity’, which saw it, the LaFerrari and McLaren’s P1 pitched together in high-performance battle. The Porsche went around its business in typically efficient fashion, with plenty of hybrid performance on offer.

It has remained one of the Stuttgart-based company’s most iconic models, while its £1.1m price tag shows it is still very much in demand.

The Ferrari F40 broke the mould when it came to supercars. Lighter, faster and sharper than any of the competition, it’s still seen as one of the very best-handling cars ever made. A turbocharged V8 engine means it’s got the performance to match elegant handling, too.

The chance to own one is something people dream of, which is probably why good examples still command up to £1 million.

It’s a sign of this list that the cheapest model available here chimes in at a snick under £1m – and it falls to the McLaren Senna to hold this title. A car built in the spirit of the P1, the Senna moved the game forward for McLaren with more performance and in-car tech.

It’s still, at heart, a proper drivers’ car, mind you, and remains most at home on the circuit.