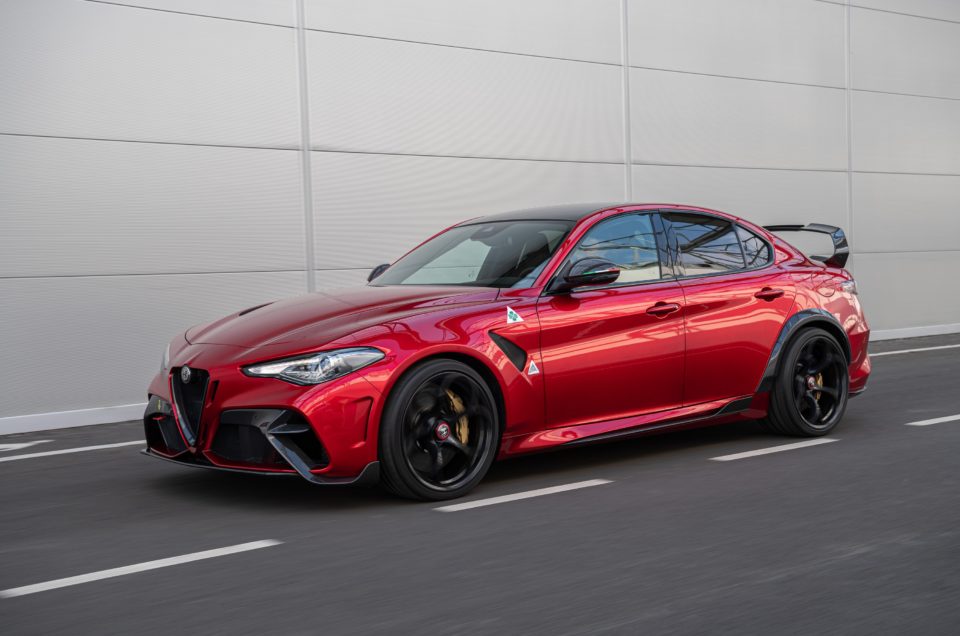 Limited-edition Giulia GTA can be had in more practical four-seat combination or no-compromise, roll cage instead of rear seats ‘GTAm’ flavour.

Alfa Romeo has let its engineers loose on the high-performance Giulia Quadrifoglio to produce an extreme version of the saloon.

This is the Giulia GTA, created to celebrate the Italian firm’s 110th birthday as well as paying homage to the Giulia Sprint GT of 1965.

Sitting underneath the bonnet of the Giulia GTA is a ramped-up version of the 2.9-litre twin-turbocharged V6 found in the standard car, now producing 533bhp — a 30bhp increase. Power is still sent to the rear wheels, with a 0-60mph time of 3.6 seconds possible in extreme ‘GTAm’ configuration.

Linked up to the beefed-up V6 is a new Akrapovic exhaust setup that brings an even more raucous note to the super saloon.

Helping to contain all that performance is a whole host of new bodywork which is equally functional as it is eye-catching. Dubbed the ‘Sauber Aerokit’, it’s been developed by Sauber Engineering — which operates the Alfa Romeo Formula One team — and has been honed in a wind tunnel.

This brings an aggressive new splitter to the front of the car, extended carbon fibre wheel arches and a model-specific rear spoiler. Despite all of this new bodywork, weight is down by 100kg overall thanks to the introduction of a carbon fibre driveshaft, bonnet, roof, front bumper and seat shells.

Taking things even further, the no-compromise GTAm features a monstrous rear wing and the removal of the rear seats in favour of a bolted-in roll cage to improve chassis rigidity. There are also no door panels and belts in place of handles inside the car to shed as much weight as possible.

Both variants of the GTA also see the introduction of more Alcantara throughout the cabin for a motorsport-inspired feel.

Just 500 examples of the GTA, all of which could theoretically be specified as an ‘m’ too, are slated for production though pricing has yet to be confirmed. Each owner will also receive a personalised Alpinestars racing suit and Bell helmet to complement the car, as well as being offered driving training.