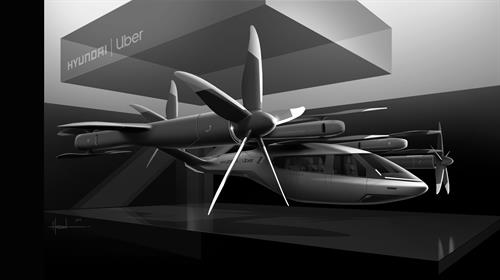 Hyundai have announced a new partnership to develop Uber Air Taxis for a future aerial ride share network and unveiled a new full-scale aircraft concept at the Consumer Electronics Show in Las Vegas.

The air vehicle concept Hyundai released today was created in part through Uber’s open design process, a NASA-inspired approach that jump-starts innovation by publicly releasing vehicle design concepts so any company can use them to innovate their air taxi models and engineering technologies.

In this partnership, Hyundai will produce and deploy the air vehicles, and Uber will provide airspace support services, connections to ground transportation, and customer interfaces through an aerial ride share network. Both parties are collaborating on infrastructure concepts to support take-off and landing for this new class of vehicles.

The all electric concept uses VTOL (vertical take off and landing) technology and can fly at speeds up to 180mph for around 60 miles in any one trip.

Designed to accommodate 4 passengers, it’s clearly too large to drop into your local high street at present and will require substantial infrastructure to become feasible, however it does show the desire that Hyundai have to be a world leader in future mobility and this kind of technology could potentially be put into a smaller vehicles, making the prospect of a true flying car more achievable than ever before.

To see the latest in automotive technology and future mobility make sure you head to The British Motor Show in August at Farnborough International. With the airport right next door, we are perfectly placed to host a future launch of the first ever commercially viable flying car !