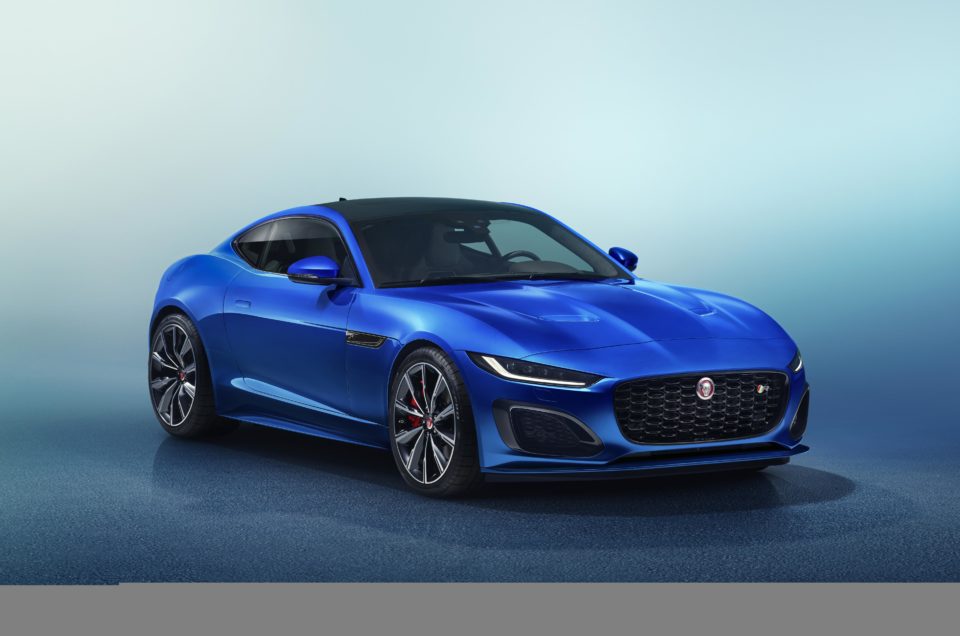 Jaguar have unveiled the new F-TYPE in what looks to be more evolution than revolution. In reality, this is a mid life facelift and most passers by will struggle to see the difference between old and new, but when you have a car as good looking as this, why would you take too many risks.

The range of engines in the new vehicle includes four- and eight-cylinder options, all matched to eight-speed Quickshift transmissions with full manual control using either the SportShift gear selector or the steering wheel-mounted paddles, however no hybrid or Electric version has been announced

The new F-TYPE offers more driver-focused technology, including a reconfigurable, high-definition, 12.3-inch Interactive Driver Display, Touch Pro infotainment system with Apple CarPlay and Android Auto as standard and software-over-the-air functionality so future software updates can be made at the owners convenience, without having to visit a Retailer.

The F-TYPE’s design has evolved with super-slim pixel LED headlights, J daytime running lights, and sweeping direction indicators, blending into the new clamshell bonnet, exaggerating the car’s visual width and its assertive stance. The new front bumper and subtly enlarged grille deliver even more presence, which is no bad thing.

The rear haunches enhance the F-TYPE’s purposeful form, while the new rear lights combine an unmistakable jaguar style LED, inspired by the Jaguar I-PACE all-electric SUV, with subtle monogram pattern detailing and a fine ‘pinstripe’ beneath.

The interior of the original F-TYPE came under some criticism and the new car addresses this by combining traditional Jaguar craftsmanship with materials such as Windsor Leather and satin-finish Noble Chrome. Beautiful details include monogram stitch patterns in the seats and door trims, Jaguar Leaper motifs in the headrests, and subtle ‘Jaguar Est.1935’ markings on the centre console finisher, glovebox release button surround, and seatbelt guides.

All engines – 300PS turbocharged four-cylinder and 450PS and 575PS V8s – feature active exhaust systems, which are switchable either as an option or as standard. Customers who choose the 450PS or 575PS supercharged V8s benefit from the new Quiet Start function, which ensures a more subtle, refined sound, great for when you are leaving home at the crack of dawn.. However, as nothing beats the sound of an F-TYPE from cold, If desired, Quiet Start can be over-ridden by selecting Dynamic Mode or by pressing the switchable exhaust button before starting the engine.

The distinctive crackle and pop on the overrun synonymous with F-TYPE, remains; the sounds meticulously tuned to suit the range of powerful four and eight-cylinder engines. Highly efficient, close-coupled particulate filters reduce emissions.

The new 450PS supercharged V8 has been developed to offer exploitable and rewarding performance – its maximum torque of 580Nm being generated from just 2,500rpm. It is offered with a choice of all-wheel drive and – for purists – rear-wheel drive. Both versions can accelerate from 0-60mph in just 4.4 seconds, and reach a maximum speed of 177mph.

Raising the output of the all-wheel drive F-TYPE R supercharged V8 to 575PS and 700Nm (up from 550PS and 680Nm respectively) delivers truly outstanding performance in all weathers and in all conditions, while retaining its inherent tractability and day-to-day usability. Performance is exceptional: the benchmark sprint to 60mph takes just 3.5 seconds, while maximum speed is an electronically-limited 186mph.

Customers also have the choice of the exclusive F-TYPE First Edition. Based on the R-Dynamic models, the First Edition is offered for one model year only, and has extras such as the Exterior Design Pack in contemporary Dorchester Grey and five-spoke, 20-inch wheels in Gloss Technical Grey with contrast Diamond-Turned finish, complementing the choice of Santorini Black, Eiger Grey or Fuji White paint.

F-TYPE is a true British sports car and is built at Jaguar’s Castle Bromwich plant. with the full range consisting of: