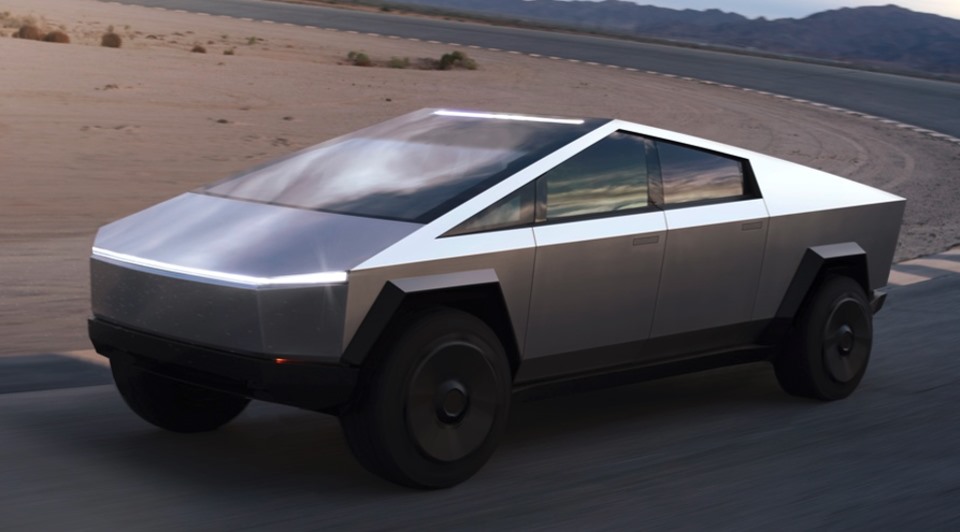 Fans of Tron and Robocop get ready to be wowed…. We present to you the Tesla Cybertruck.

Known for doing things differently, Elon Musk opened the Cybertruck event in Los Angeles by showing a video comparing pickups throughout the years, ending on the best-selling trucks in the USA with nearly identical designs.

“Trucks have been the same for a very long time,” Musk said. “We want to try something different.”

The truck is full of angles, peaking in the middle of the roof and slanting down toward the front and rear bed. Despite the pictures, it’s only about the same size as an F-150, still huge for Uk roads, but not as large as it would appear.

Tesla says the truck is bulletproof to a 9 millimeter bullet.

During the presentation, Tesla’s lead designer Franz von Holzhausen swing a sledgehammer at the door, which proved resilient to the attack, handy for footballers and oligarchs.

“You want a truck that’s really tough, not fake tough,” Musk said shortly before the stunt.

The truck has self-adjusting air suspension, up to 40 cm16 of ground clearance, and impressive performance, with 0-60 in 2.9 seconds and range up to 500 miles.

The Cybertruck is available to reserve on the Tesla site, but delivery dates have not been confirmed